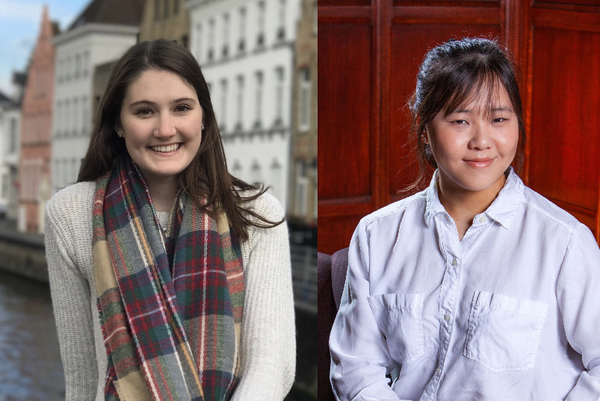 international study and service. Hye-Sim Chung, of San Diego, CA, will be using her Fulbright Scholarship to spend next year in Rheinland-Pfalz, Germany where she will be teaching English and acting as a cultural ambassador the US. Hye-Sim is a double major in German and Psychology, and her senior thesis, written entirely in German, examines the ways in which the works of Berthold Brecht are taught in German secondary schools, why those works have remained a key part of the German curriculum, and what this says about post-war Germany’s efforts to create a new national identity. Hye-Sim’s own interest in German language and literature grew out of her first German course here at Notre Dame and flourished while studying abroad for the entirety of her junior year in Heidelberg, at Germany’s oldest and most prestigious university.

Our second Fulbright Scholar is Caroline McGowan, a Neuroscience and Behavior major from Chicago, IL. Caroline will be using her Fulbright to spend the next year teaching at a special education high school in Chennai, India. Caroline has an abiding interest in working with children with developmental disabilities and their families, and grew passionate about international education through her minor in Education, Schooling and Society. She was funded by the Notre Dame Center for Social Concerns to spend the summer of 2017 working in Chennai with students with severe developmental disabilities, wrote her capstone on the partnership between Notre Dame’s ACE program and Catholic schools in Haiti, and her senior thesis on object categorization in infants at risk for autism. After returning to the US, Caroline will attend medical school, pursuing her love of developmental pediatrics.

Originally published by Kolda, Chris at glynnhonors.nd.edu on April 23, 2019.