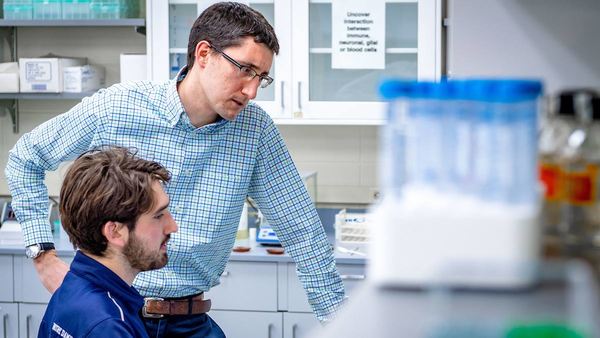 Inside the body, disease and injury can leave behind quite the mess — a scattering of cellular debris, like bits of broken glass, rubber and steel left behind in a car accident.

Inside the central nervous system (CNS), a region that includes the brain and spinal cord, it is the job of certain cells, called microglia, to clean up that cellular debris. Microglia have counterparts called macrophages that serve similar function outside the CNS in the peripheral nervous system (PNS), the region that contains most of the sensory and motor nerves.

Scientists have long believed that microglia are restricted to the CNS, and in cases of injury the two cells clean up their own sides of the highway, so to speak.

In a new study published in the Public Library of Science (PLoS Biology), scientists at the University of Notre Dame discovered microglia actually squeeze through the spinal boundary, crossing into the peripheral nervous system in response to injury. The surprising result could have broad implications in the area of nervous system diseases, while opening the door to a completely new set of questions in the study of both systems.

“Microglia are defined as central nervous system cells. So if they’re seen outside in the peripheral nervous system — that was surprising to us — that opens up a ton of new questions,” said Cody J. Smith, the Elizabeth and Michael Gallagher Assistant Professor of Biological Sciences at Notre Dame and at the University’s Center for Stem Cells and Regenerative Medicine. “It has been shown during different disease states that the macrophages in the peripheral can get into the CNS, but we certainly didn’t know or really expect for the central nervous system cells to cross over, because there was little literature that suggested that was likely.” Smith co-authored the study with Lauren Green, who is currently studying biology at Notre Dame and led the study.

Once inside the peripheral nervous system, Smith said, microglia do their job of clearing cellular debris at the point of injury, but they return to the CNS with that debris, and could potentially carry it straight to the brain.

The study also showed the microglia return to the CNS in an altered state, which makes the results of this research of particular concern to the study of post-injury development and function.

Altered microglia have been seen widespread in countless neurodegenerative diseases, Smith said, and have been implicated in autism spectrum disorder.

In disease, altered microglial cells can clear too much cellular material — including material they normally do not clear — in the brain. If microglia are altered, the suggestion is that it could cause neuropathic pain, disorder or disease-type states, because the cells are clearing or removing cellular material that’s necessary for proper nervous system function.

This research was funded the Indiana State Department of Health Spinal Cord and Brain Injury Fund, the Alfred P. Sloan Foundation and the Center for Stem Cells and Regenerative Medicine.

Originally published by Jessica Sieff at news.nd.edu on April 04, 2019.