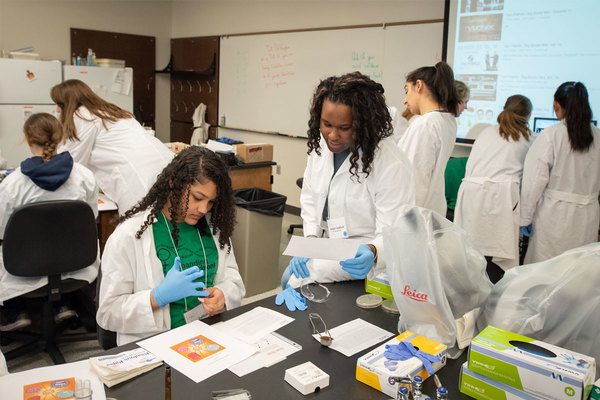 Dig a lip balm out of your purse or pocket and attempt to read the fine print on the side of it: Most have some common ingredients such as cocoa butter, coconut oil and beeswax.

“Making lip balm actually involves a lot of science and chemistry,” said Aubrey Jeffries, a first-year graduate student in the  Department of Chemical and Biomolecular Engineering at Notre Dame, who volunteered at the 22nd Expanding Your Horizons conference March 30 at Jordan Hall.

The conference brings middle school girls together with women professionals to encourage girls to learn about and possibly pursue a career in math, science or engineering. About 200 girls attended the conference this year. Volunteers organize all aspects of the day, from planning the various workshops to ordering a lunch that the girls will want to eat.

Notre Dame is one of 80 conferences nationwide with more than 25,000 girls being exposed to STEM (science, technology, engineering and math) careers and the women who work in a wide array of occupations, such as biology, environmental studies, medicine and technology.

“I think it’s important to reach girls in middle school because this is a critical age where kids start thinking about what they want to do when they grow up,” said Madeline Smith, a doctoral candidate in the Department of Chemistry and Biochemistry. “If we can show these girls that science is fun and something that other girls do as a career, then that can make a very powerful impression.”

“We want them to have fun and be excited,” said Galiya Magazova, a graduate student in the Department of Chemical and Biomolecular Engineering. “The key is that the girls have freedom but are also supervised. I feel like doing hands-on work is key to this program. I don’t want them to just watch me, but do everything themselves.”

Carolina Barragan, an eighth grader from Hammond, was impressed. “Making lip balm is so cool,” she said. “I would like to make more, maybe start my own brand or something. I liked experimenting with the color.” The girls were able to add mica powder to the mix to add some different shades to the balm. They also got to take their finished product home – and use it. 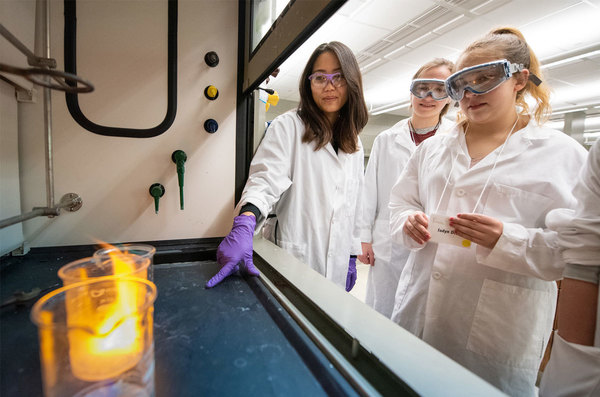 “Middle school is a really hard time for a lot of young girls,” said Alexandra Chirakos, a doctoral candidate in the Department of Biological Sciences. “I think the most important part of EYH is that girls get to see a diverse representation of powerful, intelligent female students just doing what they do every day.”

Serving as a role model for the middle-school students motivates Jeffries to take the time to connect and volunteer. At the University of Kansas, where she did her undergraduate work, Jeffries said she was involved in a two-day outreach program similar to this one and was emboldened to help girls achieve their dreams.  As a petroleum engineering student in a primarily male field, she said she would have liked to have had a more prominent female role model as a mentor.

Downstairs in the first floor tissue lab, girls were learning about the potential of tissue engineering as scientists try to mimic body tissues and organs to study the effects of medications, for example.

The life of working in labs is something Uryan Isik Can, a doctoral student in the Department of Aerospace and Mechanical Engineering, wanted to communicate to the girls.  “I want the girls to understand how things work in real life science. I want the girls to understand the daily jobs involved and lab protocol.” The fact that it involves a lot more than just listening to a lecture is appealing and maybe not for everyone.

The workshops also give the ND students a chance to practice communicating very complex ideas to someone who doesn’t have the same background in the subject, said Isik Can. Scientists have to explain their work to others, whether in business, government or another field, she noted.

Chirakos, who said she enjoyed listening to questions from the girls, felt that the sessions allowed the middle school girls to assimilate the material in their own way.

“(Middle school) is a time of intense personal growth and self discovery,” she said. “Maybe we will strike just the right chord, with the right girl at the right time, and she will discover that wants to be a scientist. Maybe she won’t remember EYH after she leaves. But maybe, deep down, we planted a seed of an idea that she could be anything she wants to be.”

Originally published by Kathy Jonas at science.nd.edu on April 16, 2019.