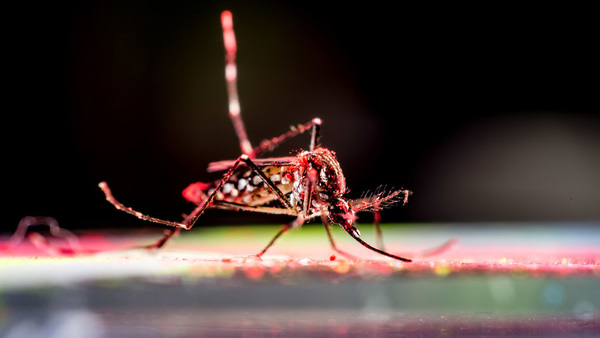 Artificial light abnormally increases mosquito biting behavior at night in a species that typically prefers to bite people during the day, according to research from the University of Notre Dame that was published in The American Journal of Tropical Medicine and Hygiene.

Increased biting by Aedes aegypti mosquitoes, which normally fly and bite in the early morning and during the afternoon, highlights the concern that increasing levels of light pollution could impact transmission of diseases such as dengue fever, yellow fever, chikungunya and Zika.

“This is potentially a very valid problem that shouldn’t be overlooked,” said Giles Duffield, associate professor in the Department of Biological Sciences, who is also affiliated with the Eck Institute for Global Health and the Neuroscience and Behavior Program. Unlike other species that may emerge from the forest to feed on humans and animals, Aedes aegypti evolved with humans and prefers to feed on them.

“They live and breed in the vicinity of houses, so the chances of Aedes aegypti being exposed to light pollution are very likely,” he added.

The findings will help epidemiologists better understand the true risk of disease transmission by this species. The discovery could also lead to more recommendations for bed net use. Usually mosquito bed nets are used at night to ward off bites from a different genus of mosquitoes, Anopheles, but because Aedes aegypti were shown to be stimulated by artificial light, mosquito nets could also be used in areas with a likelihood of disease transmission even with limited Anopheles activity.

“The impact of this research could be huge, and it probably has been overlooked,” Duffield said. “Epidemiologists may want to take light pollution into account when predicting infection rates.”

Duffield and his collaborators plan to experiment with additional variables of artificial light to further study Aedes aegypti biting activity. These variables include the duration of light, its intensity and color, and the timing of the biting — whether early at night or later. The team is also interested in the molecular genetic pathways that might be involved with biting activity, after noticing that not every mosquito in the population under study was interested in biting at night even with artificial light.

“So, we think there is a genetic component within the Aedes aegypti species,” Duffield said.

In addition to Duffield and Rund, other authors include undergraduate students Laura F. Labb and Owen M. Benefiel, also from Notre Dame. The research was supported by the Eck Institute for Global Health, a University of Notre Dame College of Science Summer Undergraduate Research Fellowship and a contract from the National Institute of Allergy and Infectious Diseases.

Originally published by Deanna Csomo McCool at news.nd.edu on October 20, 2020.