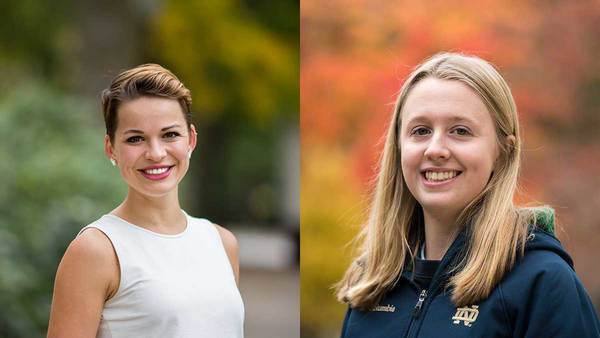 “Sofia Carozza and Katie Gallagher epitomize the commitment to scholarship and social engagement that Notre Dame reveres, said University president Rev. John I. Jenkins, C.S.C. “None is more deserving of this high recognition than Sofia and Katie. Congratulations to them, to their professors and the Flatley Center for Undergraduate Scholarly Engagement (CUSE) staff who supported them.”

“We are so happy to congratulate Katie and Sofia on their selection as 2019 Marshall Scholars. They are extraordinary individuals who exemplify both the Marshall Scholarship criteria of ‘academic merit, leadership potential and ambassadorial potential’ and the Marshall Scholar characteristics of ‘talented, independent and wide-ranging,’” said Jeffrey Thibert, Paul and Maureen Stefanick Director of CUSE at Notre Dame. “They will truly both use their platforms as Marshall Scholars to enrich the world, and we thank all the members of the Notre Dame community who have played a role in their academic, professional and personal development.”

CUSE promotes the intellectual development of Notre Dame undergraduates through scholarly engagement, research, creative endeavors and the pursuit of fellowships and assisted Carozza and Gallagher with the application process.

Named for former U.S. Secretary of State George C. Marshall, the Marshall Scholarships support Americans of high ability to study at graduate level at a U.K. institution in any area of study, covering university fees, cost of living, research and thesis grants and travel to and from the U.S., among other expenses.

On campus, Carozza is a past research assistant at the Institute for Advanced Study and a current research assistant in the Development and Psychopathology Laboratory, where she is conducting her senior thesis on intergenerational trauma and maternal maltreatment. Beyond that, she has been involved with ND Students for Worker Justice, Show Some Skin and the Women’s Boxing Club, and she shaved her head for the St. Baldrick’s Foundation through “The Bald and the Beautiful.”

Off campus, Carozza is a mental health coach for at-risk youth and leads an exercise program for youths at the St. Joseph County Juvenile Justice Center. She spent the summer after her freshman year tutoring children with developmental disabilities and psychiatric disorders in Paraguay as an Experiencing the World Fellow with the Kellogg Institute for International Studies at Notre Dame; the summer after her sophomore year conducting neuroscience research at the National Institute on Alcohol Abuse and Alcoholism, part of the National Institutes of Health, as an Amgen Scholar; and the summer after her junior year translating the science of toxic stress into policy initiatives, educational materials and community-based change at the ChildWise Institute in Montana.

Further afield, Carozza studied theology in Jerusalem and has taken short trips to El Salvador, Bolivia and Spain. She is fluent in Italian and conversational in Spanish, and she is a classically trained harpist.

Carozza plans to pursue a master of philosophy in basic and translational neuroscience leading into a doctorate in psychiatry at Cambridge. Ultimately, she hopes to establish a nonprofit foundation dedicated to translating neuroscience into child well-being.

“I am grateful and humbled to be named a Marshall Scholar. I’ve been blessed with an incredible formation in this campus community, and I’m deeply indebted to my amazing mentors in the faculty and staff of Notre Dame, without whom this would not have been possible,” Carozza said. “I’m excited about the opportunity to study at Cambridge, where I can continue to advance Notre Dame’s mission to be a force for good in the world ‘as learning becomes service to justice.’”

Nancy Michael, director of undergraduate studies, neuroscience and behavior at Notre Dame and Carozza’s academic adviser, said of Carozza, “Sofia is a rising star and I am certain she will contribute great things not only to the immediate fields of philosophy, psychology and neuroscience, but also to our society as a whole.”

Gallagher is an honors math and music major in the College of Arts and Letters. She is a Sorin Scholar, a 2018 Goldwater Scholar and co-founder and co-president of the Notre Dame Women in Math Group. Gallagher previously studied at Oxford during the 2017-18 academic year as part of Notre Dame International’s Oxford program, where she was a member of the Mirzakhani Society for women in math, named for the first female mathematician to win the Fields Medal. As a high school student, she was mentored by David Schmitz, a 1990 Notre Dame graduate in honors math and a professor of mathematics, math and actuarial science at North Central College in Illinois.

“I am thankful to Dr. Jeffrey Thibert and the rest of the CUSE staff who guided me through my application process. I am also thankful to my professors, family and friends who have supported me throughout this process and throughout my Notre Dame career,” Gallagher said. “In particular, I’d like to thank professor Frank Connolly (professor emeritus of mathematics at Notre Dame) who has been an effective mentor during my entire time at Notre Dame. His enthusiasm for mathematics inspired me to learn and tackle difficult problems in the field. I am also grateful for the guidance and opportunities provided to me by the music department and especially the guidance of Dr. Peter Smith. The combination of math and music at Notre Dame has made my experience rewarding and special."

Jeffrey Diller, chair of the Department of Mathematics at Notre Dame, said of Gallagher, “Katie Gallagher is as talented and accomplished as any math student I have seen in my 20 years at Notre Dame. She has demonstrated her capacity for hard work, for learning, for independent research and for leadership. I believe she will succeed in even the very best graduate programs in mathematics and go on to a stellar future as a teacher, researcher and leader.”

Founded in 1954, the Marshall Scholarships commemorate the ideals of the Marshall Plan — an American-led effort to rebuild the economies of Western Europe after World War II — and express the continuing gratitude of the British people to their American counterparts.

For more information on this and other fellowship opportunities, visit cuse.nd.edu.

Originally published by Erin Blasko at news.nd.edu on December 03, 2018.